Well that’s round 2 of the National Championship done and it’s already getting interesting in all classes. Dry and warm is what we wanted, and dry and warm is what we got. Out on the massive tarmac lake at Donington Park it’s possible to lay out a nice flowing course which seemed to suit everybody.
The novices led off with some impressive riding and a mixture of some aggressive attacking styles and some with a more precise technique. Not too many wrong courses either although there were a few moments of hesitation while competitors got their bearings.
A

At the end of the first attack newcomer Grant Fraser was showing the way home on his SV650 with a very aggressive approach. He finished a second ahead of Ian Handley on a Hornet with a group of three within a second of each other for third.

The experts run last and again put on a great show of skilled riding, it looks so easy when it’s done well. Reigning champion Rob Fox put his little Honda 250 2 stroke into the lead by the huge margin of 0.38 seconds from Mark Wraith on the DRZ400. Both had had clean tidy runs so their second attacks would need just that little bit more if they wanted to clinch the win. Third expert was again Ian Ashford  on this CBR600.

In the Women’s class Beth Price Williams was well out in front, her super precise tight turning style giving her a healthy lead over Joanna Noble Finch on the KTM690. Joanna had had a bit of a navigation error but Beth was faster even taking that into account so all was to play for in attack 2.
With the weather cooperating the novices went out for their second attack, some improving their times massively over run 1, bringing about changes to the leaderboard.
Grant Fraser dropped his bike on a tight rotation ruining his time but fortunately for him his first run was just fast enough to hang on to the lead by 0.39 seconds from an on form Steve Laughton on his R6. Steve had been one of the group fighting for 3rd but jumped ahead of the group, improving his time by nearly 6 seconds. Third went to Ian Handley, just over a second behind top spot and his second visit to the podium this year.

So with only a second covering the top three novices and with a few more snapping at their heels it’s going to be a very competitive class this year. All three got a ranking point towards expert status, as did Gary Davies with his second point of the year.

In the women’s class there was a disappointing end to Beth Price Williams’ challenge, her Honda CB1 suffering mechanical problems. Joanna Noble Finch was on a mission, smooth with no time wasted she improved her time by a massive 17 seconds giving her the win over Beth. Third was Pauline Thornton on a KTM 390 Duke.

And so to the finale, the second run for the experts. All the front runners knew how determined the others were to win but a fast moto gymkhana run isn’t just about going out and attacking every obstacle flat out, you have to mix aggression with control or you can just end up losing time running too far past a turn or running wide on an exit. Both of the top two improved their times but it was Mark Wraith who improved his by a bigger margin, beating Rob Fox by less than a second. The battle for third was just as tight, Andi Beazeley sorted out his navigation issues from run 1, the back wheel of his XSR 700 Yamaha scrabbling for grip out of every turn but unfortunately for him Andrew Rayfield just pipped him by a second to take the third podium spot.

It was a tense climax to the day’s competition with everyone watching in anticipation as the timing screen flashed up Mark’s final time.

So with two rounds done Mark Wraith is the championship leader with defending champ Rob Fox only 6 points behind. Just 4 points further back in 3rd is Andrew Rayfield, all three are still well in the hunt for the championship.

In the novice class Steve Laughton and Gary Davies are joint leaders with Ian Handley only one point behind in 3rd. Grant Fraser and Paul Brown are only 2 point further behind so this class looks like it’s going to be a tight one too.
Joanna Noble Finch leads the women’s class from Beth Price Williams. As Beth gains more experience expect her to be challenging the super competitive Joanna as the year progresses.
And so we move on to a new venue for the next round of the championship, we are at Rockingham Motor Speedway for round 3 on Sunday 6th August, spectators are welcome, as are marshalls.

I’m sad to announce that on the 11 June 2017 our friend and Moto Gymkhana Member Gary Davies was killed in a motorcycling accident.  We will all remember his competitive spirit and his passion for motorcycling.  Our thoughts are with his family and friends. We’ll miss you man… 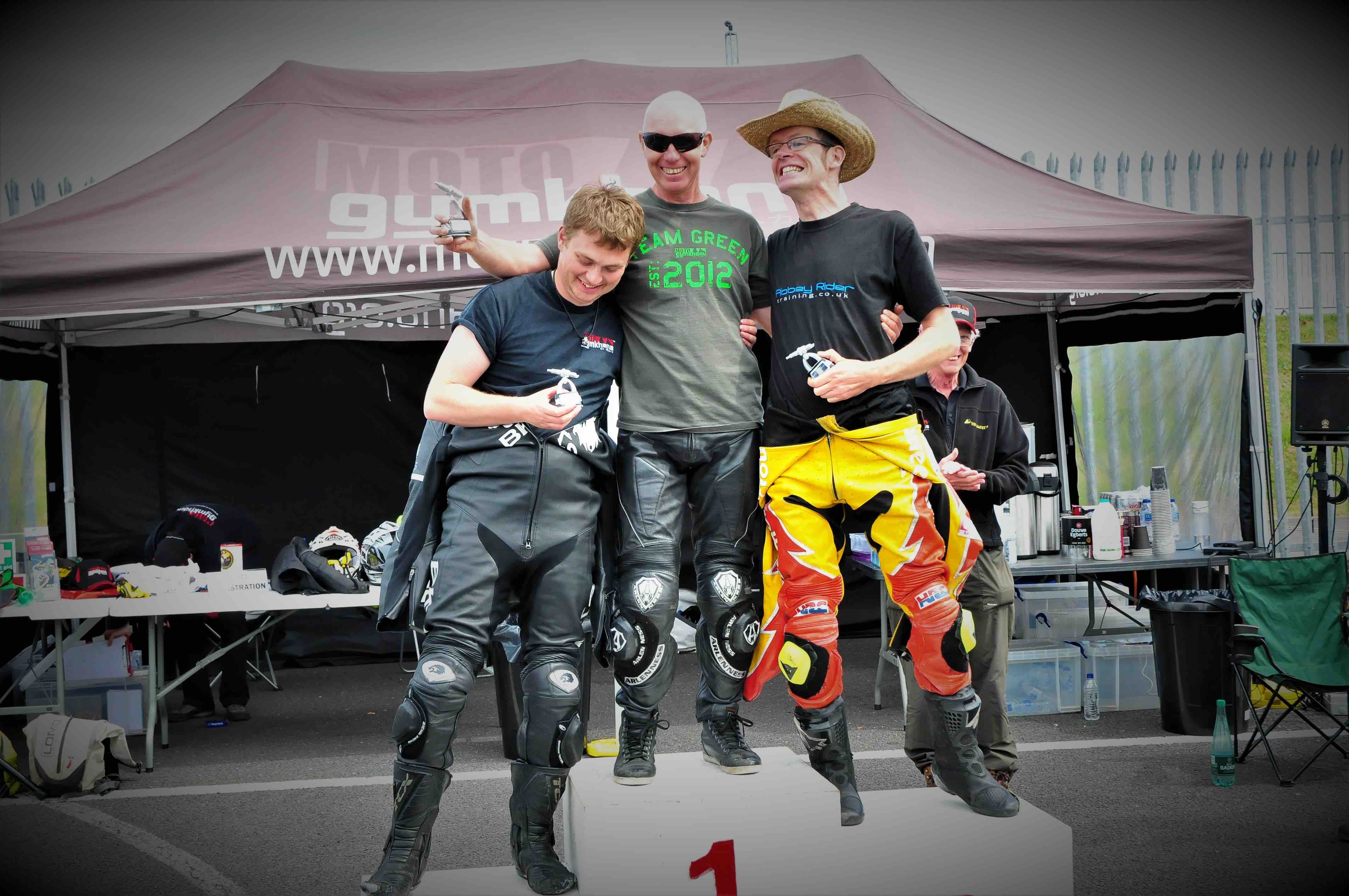